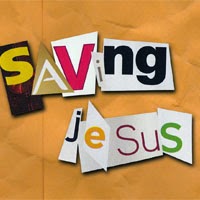 On Sunday nights I go to a discussion group at the United Church called Saving Jesus. There's a link to it here. Living the Questions.

No one is wrong.

I love that. It allows open questions and no judgement.

This was the introduction and it had several concepts to wrestle with. In no particular order...

1. Stripping down Jesus. This is about how many layers we have put on Him through the years. It made me think it would be interesting to take the NT and just read what He said.

2. Believing versus doing. I've always had a problem with Christians who have a list of what you have to believe in order to be a Christian. I have problems with that. I also have a problem with the concept of "as long as you accept Christ you'll be saved". Because that's nothing about doing what Christ asked us to do...which leads us to...

3. The sermon on the mount was about doing. Three hundred years later the Nicene Creed that almost all Christian churches have adopted is about believing. What you believe has become more important than what you do, which is not what Jesus taught.

4. Original sin. Now the LDS church does not believe in original sin. Nor do I. In fact Jesus never talked about it. This again was adopted by Christian churches stemming from the Nicene Creed. You are sinful if you are born and you are this horrible being who must live in everlasting hell if you don't accept Christ. But how can that be if we are children of God? In fact we are  princes and princesses. We are His children. Can you imagine if someone said that you're children are horrible and filled with sin because they were born. We're all going to sin in our lives, but being born isn't one of them. I am grateful to the LDS church for not teaching original sin.

5. Jesus didn't want to start up His own church but wanted to reform the faith He was born into. The Israelites are God's people. Jesus and His followers were Jews. Christianity is not a separate entity from Judaism but a continuation. Sure the Jews went down a different path, and Christianity broke off into different branches, but it's still the same roots. That's actually another thing I learned from the LDS church.

No my problems with the church has to do with it's own history and the way they conduct themselves now.