The Polygamy Issue Part 1: The Introduction


For Mormons, polygamy or plural marriage as the church prefers to call it,  is a sensitive topic.

It is part of our history. It was often called The Principal, most likely because the word polygamy was undesirable. There are members who don’t know that Joseph Smith practiced it although he was the one who implemented it. It’s right in the Doctrine & Covenants so I don’t know how they don’t know. I guess it’s the “don’t ask what you don’t want to know” mentality, which I understand. I put the subject of polygamy on the back shelf for years because I didn’t know how to deal with it and the subject made me feel bad.

There are some who deny that he did practice it, although that fact hasn’t been hidden by the church. It’s just been downplayed a lot, but it has not been hidden and many church manuals touch on this subject.

The recently published church manual, "Daughters in My Kingdom: The History and Work of Relief Society" has a section on plural marriage. Click on the following link and scroll down to "Defending the Practice of Plural Marriage". For more information on what the church says you can go to 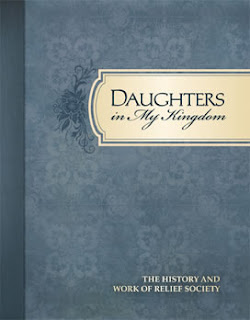 the lds.org website and enter "plural marriage" in the search box.

No, the church doesn't deny it, but they try not to talk about it too much. It's an uncomfortable subject.
There are some that will say that because we don’t practice it now, it isn’t something to concern ourselves with.

And others will admit to having problems with the concept but would be willing to live it if it became part of the church again.

And then there are those who would willingly embrace it and wish we lived it now. I know someone like this, and surprisingly it’s not a man.

We are instructed in the church to follow our feelings of the spirit, and this screams loudly that it’s wrong.

But it isn’t just my feelings that tell me this. The scriptures and logic do as well.

I had initially written a blog post that turned into a way overlong essay. So instead I`ll be posting on this subject in pieces.

I am aware that there will be those who will see me as an apostate - a word often freely thrown around and used towards anyone who doesn`t agree with every tenant of the church. There will be those who might accuse me of trying to tear the church down, which is far from the truth. I am trying to find ways to stay within the church. I have no desire to tear down something that I believe is inherently good. I have no interest in becoming an anti-Mormon and filling my heart with hate towards Mormons instead of love towards my fellow man.  But I wonder about those members who have the same struggles and are afraid to say anything. I have no power to change things. It is not my call. All I`m trying to do is express a viewpoint, the viewpoint that I love Heavenly Father and Jesus Christ. For those who question my devoutness you can read my page post "Why I Choose to Be a Mormon".

I find it interesting that often the same people that have no problem with plural marriage, do see adultery as a serious sin. So much so that we are counseled to not be alone with a married member of the opposite sex. I'll talk about my thoughts on that in another post.

I have chosen not to announce these particular posts on Facebook or other social media. If people are interested they will find me. I do not desire to make anyone uncomfortable or cause a firestorm.
Posted by Anna Maria Junus at 12:36 PM