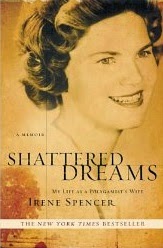 Irene Spencer was born into a polygamous family. The daughter of the second wife, she watched as her mother's life shattered causing her to leave her husband. Yet, at the age of sixteen, Irene chose to become the second wife as well and watched as her husband took on more and more women. Living in poverty and neglect, as well as among the murderous cult of her husband's brother, Irene tells a story of love and triumph while she raises thirteen of her own children.

This is a fascinating story, however, I have a couple of problems with it.

Now I understand that more often than not in polygamy, young women don't have much say in who they marry. They are brainwashed to believe that it's the only way to be exalted, they are taught to obey, and they believe that sacrifice is the price you pay for God's love.

Irene too believed those things, but unlike other women her age she was presented with choices. Her own mother and brother advised her not to marry Verlan LeBaron. She had a boyfriend (although frankly in his late twenties he was way too old for her and not age appropriate at all) who also wanted to marry her. She claims she was madly in love with him and you can hear the yearning in her book for him, her missed opportunity to become the sole wife of one man.

She doesn't treat this boyfriend very well, changing her mind constantly until he's finally had enough of the see saw she puts him on and he leaves her forever.

Frankly, her best choice would have been not to marry either one but instead grow up and get an education. She didn't do that though and instead goes to her sister's house (her sister was already married to Verlan) and camp out there until she becomes Verlan's wife. (I couldn't help thinking "that hussy"). She even admits it was awkward and she didn't feel like Charlotte, her sister wanted her there.

After the secret ceremony she tells about jealousies and tantrums she has when Verlan spends time with his first wife and later marries more. She sees these women as intruders.

Which made me go "huh?" Irene took it upon herself to marry Verlan even knowing that her sister was not gung ho about the whole thing, and then she complains because Verlan doesn't give her all his attention.

Throughout the book you can see that Irene didn't grow up. Her growth was stunted by the foolish choice she made (yes, she did choose it). She is furious when Verlan marries other women, is furious when he doesn't spend all his time with her, and even though a man comes along who is willing to take her away from it all (including crippling poverty and a murderous brother-in-law), she still sticks around complaining.

So many times I wanted to shake this young girl and say "stop it! Take your children and get out!"

If she wanted a husband all to herself (which is entirely reasonable and fair) then she shouldn't have married a married man. Duh. Many of the things she complained about the other women doing to get attention and time with Verlan, she did herself. Remember, this woman was not forced into this marriage. She had other options which would have been supported by close family members.

It's such a bizarre world she takes us to where people still try to live according to the teachings on marriage by Joseph Smith, Brigham Young and Heber C. Kimball.

Most devoted LDS will deny any connection to the fundamentalist polygamist groups, but it's like saying your brother isn't your brother. They all spring from the same roots of Mormonism. Just because one went one way and others went another way doesn't mean they're not connected. In fact, the fundamentalist groups are closer to Joseph Smith's teachings than the official LDS church is.

However, the LeBaron group was (or is, not sure) a group that went totally for the crazy. Verlan's brother Ervil went on murderous rampages claiming authority from God. Irene chose not to tell that story in this book because she wanted to focus in on her story and not allow Ervil's to take it's place. Later she wrote more about the church he started and the events that transpired. (Notice how Ervil is close to "Evil". Could he have been living up to his name?")

Irene does finally choose to leave Verlan and is now happy in a monogamous marriage, however she still speaks of her ex glowingly saying he was a wonderful man - although I could hardly call him that after reading about the way he treated her and the other women. He was so focused on his exaltation that he didn't even take care of the wives and children he had before getting more - nor did he care about how any of them felt about it. In fact he comes across as a real jerk.

I also listened to an interview with her on Year of Polygamy a podcast series I highly recommend especially to all LDS women.  You can listen to that here.

Episode 80: Married to a Prophet - An Interview with Irene Spencer

And to learn more about the LeBaron's and the group Irene was involved in:

And here's Irene's website. She's written two more books, One about Evil Ervil and one about her life after polygamy.

I would recommend this book to anyone who's interested in polygamy. Be aware that many of the beliefs that Irene was raised with are not current LDS doctrine and LDS members don't think or believe this way. However, they do come from past teachings that have been left on the wayside by the LDS church. The fundamentalists still embrace these teachings.