I made a goal this year to read all my scriptures. That would be the Old and New Testament, the Bible Dictionary, The Book of Mormon, The Doctrine and Covenants and the Pearl of Great Price. It sounds insurmountable but with the help of the internet I figured out I could do it by reading seven pages a day. Not that insurmountable.

I had heard many say that the Old Testament was difficult and they didn't like it. I didn't understand this. The Old Testament has some of the greatest Biblical stories. The creation of the earth, Moses parting the seas, beautiful Esther saving her people, Noah and the ark, Joseph and his multi-colored coat, Jonah getting eaten by a whale. Sure there was bad stuff but everyone knows you have to have bad stuff in order for the good to overcome insurmountable odds and win. It's a basic rule of literature. You have to have conflict.

I had studied the Old Testament in the past. Bits and pieces here and there and I had started it a few times just reading and never got much further than Adam and Eve. This time I made a concentrated effort to read it like a book, to get an overview of it all.

After two and a half months of reading I have to say, if I weren't already a devout believer I would be an athiest.

The Old Testament is awful and leaves me with more questions than answers. I'll be talking about them here on this blog. I'm going to focus in on two incidents for this post.

Solomon was considered a wise ruler. When two women came to him fighting over a baby claiming his (or her) as her own. Obviously one was lying. They didn't know about DNA back then or had any way to test it to determine these types of things, nor did they have lie detector tests or profilers so Solomon made a suggestion that has since been dubbed "The Wisdom of Solomon".  He said that they would take a sword and cut the baby down the middle and each woman could have half.

One woman agreed to it. 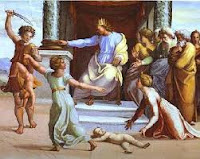 Solomon was considered wise because he then granted the baby to the woman who wouldn't do that.

I don't think Solomon was that wise (the man had 700 wives and 300 concubines). I think that one of these women was just so incredibly stupid she should have been locked away and not allowed anything remotely sharp.

The other incident happened during a famine. A woman, lets call her Dodo, came to the king complaining about a broken promise. She had made a deal with another woman, let's call her Morona, that they would kill Dodo's son and eat him and then the next day kill Morona's son and eat him. So they killed Dodo's son and ate him and when the next day came Morona wouldn't follow through on the deal. Dodo felt it was unfair that Morona wouldn't kill her son.

What kind of woman kills her son and eats him? And how come they had to kill the next day? Weren't there leftovers?

Women throughout time have starved to keep their children alive. Killing your child and eating him would never enter into 99.99 % of mother's minds. She would rather cut off her arm and eat that than do it. She would rather kill them both and end the misery than eat her child. And what kind of mother would want to eat another mother's child?

I think both those women should be put in the same cell as the woman who wanted half a dead baby. They can all eat each other and the son that survived the cannibalism can be raised by the woman who wouldn't cut her baby in half.

As a feminist I hate admitting there are stupid women. But indeed there are. And it wouldn't even be so bad having these stupid women around if they weren't so evil too.
Posted by Anna Maria Junus at 4:17 PM