Learning to Not Be Tolerant


A couple of weeks ago I gave a talk in church. That was a risky thing to ask me to do since no one ever knows what I might say but perhaps they have no idea how much of an apostate I am. Okay, not really. I just find it funny that we like to throw that word around whenever someone in the church says something that doesn’t agree with what the latest leaders say.

They asked me because it was my turn. What other church has the congregation give the sermons? I think it’s great. We all have the opportunity to speak, and if once every few years isn’t enough, we have the opportunity once a month to stand up and bear our testimony in whatever way we want. No one has control over this. It’s great.  Testimony meeting is sometimes exciting because you never know what people will say. For the most part, people tow the line and say the required words, but I’m going off on a tangent. Back to what I want to write about.

I was given the topic of the 11th Article of Faith which is actually quite a nice one – they all are by the way.

11 We claim the privilege of worshiping Almighty God according to the dictates of our own conscience and allow all men the same privilege, let them worship how, where, or what they may.

It’s a great standard. It’s too bad the world doesn’t follow this. It would be so much better if they did.

I was going to write my talk and then post it here but as it turns out, I never actually wrote a talk. I just quoted some scriptures, told some stories and gave a brief history lesson on Martin Luther, which was really the only part of the talk that I wrote. To look at my notes you would see "tell story about Narnia" (referencing my stint as the White Witch in a play), or "tell about grandfather" (which is a big long story that I don't want to get into right now. Basically it was "here's a scripture, this is what I think."

I just wasn’t in the mood to write anything, and I worried that I would fall into preaching. I didn’t want to preach. It’s not my place. So I asked the Lord to help me out and say what He wanted me to say, and not what I wanted.

I hope that’s what happened. I can’t say one way or the other if it was. I can say that I received several positive comments about my talk, but again, that could have been politeness. It’s expected when you see someone who has given the talk to say “great talk”. And you can’t tell by applause if you’ve done well, because we Mormons don’t applaud in the chapel. I guess it's felt that applause takes away from the spirit. I tend to agree. Trouble is, we never know when we can applaud at church. But I'm going off on a tangent again.

What I do want to mention in this post, is one idea that I came away with that I hadn’t thought about before giving this talk. Perhaps that is the kernel that comes from the Lord. I don’t know. 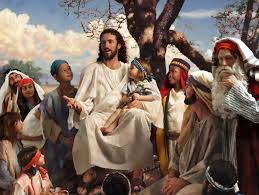 I spoke mostly about the love of Jesus, and I mentioned the world Tolerance.

It’s a word that we use a lot. We look at it as a positive word. It’s a pat on the back word. “I’m tolerant of my neighbor.”

But it seems to me what it really means is “I’m right and you’re wrong, but I’ll put up with you anyway.”

It’s filled with pride, self-righteousness and lacks understanding of the other person or their ideas.

When did Jesus teach that?

If instead of telling our children “I love you,” we said to them “I tolerate you,” what kind of message does that send them?

Now tolerance is certainly better than being hateful, and given the choice, by all means let’s choose tolerance, but we can do so much better than that. We can try and be like Jesus.

That doesn’t mean we should embrace everything that comes along nor agree with everything.

But we can disagree with our fellow man and still show love and compassion and try and understand.

In fact it seems to me that tolerance is showing allowance for serious hurtful sin that damages another, which should never be tolerated.

And it isn’t just outside of the church that we should love and accept those who are different from us, but inside the church as well. Are we calling those who we disagree with, who don’t toe the line, who don’t blindly follow everything that is being said, an apostate? Is that loving?

Perhaps we’re not, but instead we are being tolerant. We are looking down on them and saying “I’m right and you’re wrong, but I’ll tolerate you and you’re weird and completely wrong ideas, and I will continue to tolerate you even though you’re an apostate and I am filled with love and compassion because I am so much better.”

I too am guilty of tolerance, but I’m trying to do better.
Posted by Anna Maria Junus at 4:56 PM