Through the years there were things about the church that I had joined at seventeen that I didn't like and because I didn't understand it, I would put it "on the shelf" or "on the back burner" or "in the closet" where I didn't have to deal with it.

Some things I loved. Families are forever, Heavenly Mother, Jesus.

But in the end, polygamy wasn't what broke the camel's back. It sure weighted that camel down though and after the back was broken polygamy took a hammer to it. Which now is just making this whole metaphor bloody.

Nope, it was the face in the hat.

When I joined the church I was taught that Joseph Smith was visited by the angel Moroni who commanded him to get the Golden Plates which were buried in a hill near where Joseph lived. Following the angel's directions Joseph found the plates but was forbidden to remove them. It took several years before he was considered worthy to have the plates and with the plates came the Urim and Thumim, devices that would help him translate the characters on the plates.

Now I was never clear on what the Urim and Thumim were. Sometimes it seemed to be a breastplate representing the twelve tribes of Israel that a man with the priesthood would wear while doing his duties. In fact there's an illustration on one of the church Institute manuals. You can see the guy sitting down is wearing it. I tried blowing it up but it just made it fuzzier. 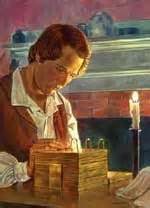 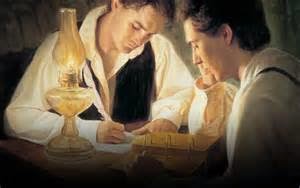 The other explanation is that it was spectacles that Joseph could put on and see the characters. In fact the Urim and Thumim could be both these objects.

Art in the church depicted Joseph studying the plates.

This is what I was taught. The story never changed. This is what was said at church in sacrament, in Sunday School, in Relief Society and in every church meeting where the subject was about this the Golden Plates. And I was satisfied with the explanation that after Joseph translated the plates, the angel Moroni took them up to heaven.

Nowhere at church did I get this image.

Not once did anyone at church mention that Joseph stuck his face in a hat where he had placed a rock and translated that way.

When I first heard this I was watching an episode of South Park. It was an episode about the church that even I, a devout member found amusing and I wasn't even a South Park fan.

Of course when they said this I knew that the South Park people were making it up, or at the very least just saying stuff that anti-Mormon people make up. It was too ridiculous to be true.

One day my son mentioned it to me and I brushed it off. "That's just anti-Mormon stuff that people say. It's not true."

It took a couple years later when I dared to venture out of the safety of Mormon hood and started listening to John Dehlin's Mormon Stories. I'm not sure which church historian said it, but it was someone who was a respected historian, who was or still is a member of the church, and was or still is fully believing.

This was no anti-Mormon.

And as I looked further, I found that  the face in the hat story was true, not the story that the church had been teaching me.

He was arrested and found guilty for this. And he wasn't charged just once. The church never tells that part of the story either.

So then he uses that same stone that doesn't work to translate the gold plates which don't even have to be in the same room with him.

I'm a miracle believer. I believe that God can do pretty much anything He darn well pleases. I have seen miracles and experienced them. We don't know everything that this world has to offer.

So I can believe in angels and golden plates and translations with instruments coming from God.

I can't believe in a face in a hat with a found stone that was used to con people out of money.

So how can the church be true?

And how can the Book of Mormon be true?

Or the Doctrine and Covenants and the Pearl of Great Price?

And if Joseph lied about how he translated, then how can the temple rituals which Joseph got from the Masons be binding?

The entire thing topples to the ground because of a face in a hat.

Can the church stand once everyone discovers this?

The church has to admit that they are another Protestant church that testifies of Jesus Christ.

And then maybe it can survive.

And then maybe that is a church I can support.

But I can't proclaim an unapologetic lying church as being the only true church.