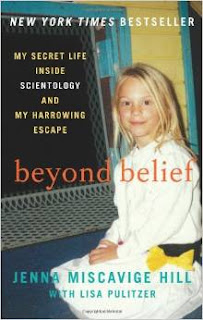 Jenna Miscavige Hill the niece of current leader David Miscavige grew up in Scientology. Her parents, members of the Sea Org, the organization within the church, willingly handed her over to the church while they served wherever the church sent them.

Jenna explains the billion year contract that she signed as a child to belong to the Sea Org, the years of child slave labor and little education, and the complete control the church held over her family including when they could visit each other, for how long, where everyone in the family lived (it's normal to have a husband and wife in different places and the children somewhere else), communication (all communications are read), what they wear and what they own (which isn't much since they're not paid, the church provides room and board).

It appears that there are three different groups within Scientology. The regular members who live life out in the world and have little to do with the workings of the church ; the Celebrity group who receive all the benefits and perks while promoting the church; and the worker bees who are told they are the leaders, The Sea Org, an almost military part of the church where even children are members for a lifetime, and another lifetime, and so on and so on.

What is astonishing is that the church can get away with child slaves, for the work is grueling as they force young children to dig ditches and build buildings while neglecting their education. All education is geared towards working within the church where when they grow up they will put in long hours and receive almost no pay.

The other stunner is the celebrities that support this while they live their lives of luxury. John Travolta, Tom Cruise, Kirsty Alley, to name the most prominent.

This is a heart breaking story and as more and more information comes to the surface from former leaders who have left, unequivocally true. It's also a really good read and hard to put down.

Perhaps in an effort to end the child labor problem the church has cracked down on Sea Org members and is preventing new marriages and forbidding babies. It's expected when a young woman gets pregnant that she get an abortion. It was the final straw for Jenna who managed to get away.

This is not just a weird church. This is a dangerous organization.

Interestingly, one of the things they believe is believed by many other churches including the LDS one. They are the only ones with the truth and it's their job to spread it until everyone has the truth.

Yeah, that sounds so familiar.

Kudos to Jenna for her bravery in telling the truth.