Why I Have a Problem With This City Creek Center Ad 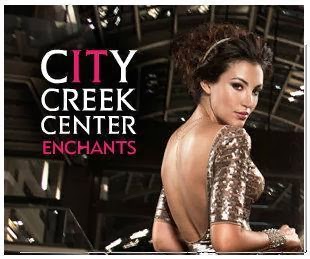 This is the ad for City Creek Center, a mall in downtown Salt Lake City. A mall which the LDS church built for billions.

But I'm not going to talk about the morality of  a church building a multi billion dollar mall.

I want to talk about this ad which advertises the mall. Not specific stores in the mall, but the mall itself.

Keep in mind that personally, I see nothing wrong with the way this woman is dressed. Her back is lovely. I see no immodesty. She looks elegant. Frankly, I wish I could look like that.

However, the church teaches that this is immodest. The church demands that those who go through the temple wear garments that would not allow this type of clothing. The church often asks young women to wear t-shirts and long shorts over bathing suits while at girls camp. The church has strict rules at BYU about clothing that doesn't even allow skirts above the knee with leggings.

Women in the church are told to keep their shoulders covered - no sleeveless, and their skirts and shorts to the knee or below. We even teach our children to cover up. No sundresses on little girls.

If this were an ad for a particular store I would see nothing wrong with it. The church doesn't own the stores, just the mall.

If this were an ad from a Mormon owned business, I would still have no problem with it. Mormons are free to run any ads they wish even if it doesn't jive with their own personal standards. They are free to sell alcohol they wouldn't drink or clothing they wouldn't wear. I don't see this as hypocritical because individuals are not the ones who tell others what to do and have followers who believe that following them is imperative to eternal life.

The LDS church on the other hand is a church. It has rules that it expects it's adherents to follow. Not only to follow but told that if they don't they put their eternal life with God in jeopardy. Included in that is the ability to go to the temple. To go to the temple you have to dress a certain way which would include covering up your back.

This beautiful young model in the lovely gown is not dressed in a way that meets the requirements of the LDS church.

Not only that, but it's unnecessary. It's not as if putting her in an elegant dress that does cover her is going to make people gawk and say "what is that weird thing she is wearing". It's not as if she needs to wear a burqa or a pioneer costume to sell City Creek Mall and meet the church standards. She can still wear church standard and look like a modern day woman.

So why the disparity? Why is the church using an ad showing a woman dressed in a way that would cause an LDS woman to get in trouble on the BYU campus, or frowned on at church or prevented from going to the temple?

Seems to me if they want members to do what they say, they should set the example.
Posted by Anna Maria Junus at 6:27 PM