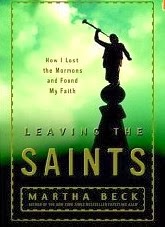 Leaving the Saints: How I Lost the Mormons and Found My Faith

As “Mormon royalty” within the Church of Jesus Christ of Latter-day Saints, Martha Beck was raised in a home frequented by the Church’s high elders in an existence framed by the strictest code of conduct. As an adult, she moved to the east coast, outside of her Mormon enclave for the first time in her life. When her son was born with Down syndrome, Martha and her husband left their graduate programs at Harvard to return to Utah, where they knew the supportive Mormon community would embrace them.

But when she was hired to teach at Brigham Young University, Martha was troubled by the way the Church’s elders silenced dissidents and masked truths that contradicted its published beliefs. Most troubling of all, she was forced to face her history of sexual abuse by one of the Church’s most prominent authorities. The New York Times bestseller Leaving the Saints chronicles Martha’s decision to sever her relationship with the faith that had cradled her for so long and to confront and forgive the person who betrayed her so deeply.

Leaving the Saints offers a rare glimpse inside one of the world’s most secretive religions while telling a profoundly moving story of personal courage, survival, and the transformative power of spirituality.

All righty. Above is the synopsis at Amazon. Now my comments.

First off, Beck is a funny writer. I love funny writers. Even though much of this novel isn't about funny things she manages to put her humorous twist in it. Sometimes it backfires on her when reviewers take some of what she says seriously.

The important church figure that was her father is Hugh Nibley, the most famous LDS apologist. Everyone in the church has heard of Nibley even though he was never an apostle.

Which is what makes this book so shocking. No one wants to think of the honorable Nibley as raping his own daughter. She frames it as a reenactment of Abraham being sacrificed as told in the Pearl of Great Price. It's a memory that she has long forgotten and then appears one day.

Her family has spoken out against this noting that in the small house they were raised in, with so many kids around it just wasn't possible. Added to that according to the family Beck leaves out the dabbling she did in hypnosis and other methods that have proven to produce false memories.

I don't like calling victims liars, especially when it comes to rape victims. However it does happen. Roseanne Barr accused her family for years and then later confessed that it was all a lie.

The other part that caused me to question Becks story had nothing to do with her father or abuse.

Beck worked at BYU and she tells of incidents where the church was cracking down on professors for their writing. That I believe. There are others who have said the same thing especially after the September Six fiasco.

Nope it's not that. It's her story that when she went into the expansive library at BYU she couldn't find a single thing on Sonia Johnson the Mormon Feminist who publicly supported the ERA and was excommunicated for it.

Now we're not talking just books here. Beck claims that even in the microfiche every reference to Johnson had been deleted from the newspapers.

How is that even possible? Johnson was a big name at one time and made national headlines. Even people outside of Utah knew about her.

I simply can't believe that the church hired people to extinguish everything ever written about Johnson. The task would be huge and have very little effect since someone can simply go to another library. It would be a useless exercise.

What's more, I have read that others have found the information in the BYU library and even at least one book on her.

So I came to the conclusion that although the book is entertaining, it is not truthful.

So read it for fun, not for real information.
Posted by Anna Maria Junus at 8:54 PM