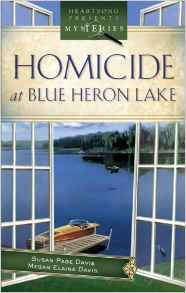 When newspaper reporter Emily Grant returns to the family cottage on Blue Heron Lake to make it ready for possible sale, she doesn't expect to fall for Nate Holman, her high school crush, all over again. She really doesn't expect to discover not one, but two dead bodies on the peaceful island lake.

This is an inspirational murder mystery romance. So nothing hot and steamy, but there is a lot of grappling with Emily's past regarding her now dead step-father, as well as run-ins with former high school aquaintences.

Plus there's the threat of a conservation group that wants to buy up enough land to be able to rid everyone of their cottages (which I don't quite understand how that can happen).

The writer does an excellent job depicting life on a summer lake. It makes me wish that I had had that experience on a regular basis (I once was invited for a week to someone's summer cottage - and I loved it). It's a different world. Can you get nostalgic for something you've never had?

I did find the main character judgmental of another characters faith journey. But I guess that's to be expected in inspirational books where it's the main characters beliefs that are right and everyone else is wrong. Except for that annoying quirk, Emily is likable and capable.

Nate Holman is a romantic character. He and his mother own the marina general store where they rent boats and deliver the mail. He's strong but not controlling. And he's in love with Emily, as he's always been.

The murder mystery was fine although I felt it wasn't quite finished. I would have liked to hear from the murderer.

But really I was sighing more over having a cottage on a lake than about anything else.


Other books in the series