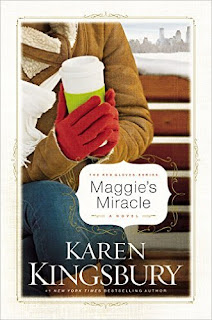 Eight year old Jordan has a simple request for his busy lawyer mother - address and mail a letter from him to God.

When Megan opens the letter she discovers the request is for a new Daddy, a request that Megan feels is impossible to give. After her cold marriage to a man many years older which ended in his death from a heart attack, she feels no need to try again. However she does discover a program for Healing Hearts, a way to provide Jordan with a male mentor.

Meanwhile, Casey is still in grief from the death of his wife and baby two years earlier. He deals with it by jogging, but one day he sees an ad for Healing Hearts, a program that puts adults together with grieving children. Maybe it's just what he needs.

Karen Kingsbury is a well known inspirational writer. This is a quick Christmas book - it can be done in an evening. As with many inspirational books there's no such thing as coincidence. All the seemingly coincidental occurrences are because God is in charge so you can get away with a lot more than a secular audience would accept. And we pretty much know what's going to happen in the end, because that's what romantic books are about.

Still it is heartwarming. I find the writer tells too much. Perhaps because she wanted to get all the information in a short book. But there's lots of background stuff that could have been handled differently. It's all stuff we needed to know, but it could have been done better. Flashbacks for instance, or mentions in conversation, instead of "this is what happened".

She does a good job telling the story from three different viewpoints in third person. Especially Jordan's viewpoint which really does sound like a young boy.

Still, I think this story would have been more powerful, if it had taken it's time and showed us instead of told us.

Karen Kingsbury's Website
Posted by Anna Maria Junus at 9:18 AM